If you’re new to vaping and have just bought your first electronic cigarette starter kit, you probably have a lot of questions about the etiquette and laws around e-cigarettes.

Vaping sometimes gets a bad reputation from those few vapers who blow huge, smelly clouds in people’s faces in public spaces. This inconsiderate behaviour not only bothers people, but also makes it more likely that rules will be introduced to limit vaping.

So, to be a more considerate vaper and help improve the reputation of vaping, here’s a comprehensive guide to everything you need to know about vaping etiquette and rules, written by vaping etiquette experts

There are a few key aspects of vaping etiquette that every vaper needs to know, some are more obvious than others, but here’s our guide to vaping best practices.

Don’t blow vapour too close to other people

No matter how much you enjoy your e-cigarette, there’s no guarantee that your friends, coworkers, or strangers on the street will appreciate your clouds of vapour. Take a few steps away from other people when exhaling and make an effort to blow the e-cigarette vapour in a different direction

Even if you make an effort to use your e-cigarette away from other people, they might still catch some of the scent of your e-juice. If you choose an e-liquid with a strong flavour, this might be unpleasant for some people. Instead, opt for a more subtle e-liquid flavour on days when you are likely to be vaping near other people or in public places. For example, our Spearmint Ice nic salt e-liquid is a great choice for a more understated but delicious flavour, while the classic Menthol shortfill is another e-liquid with a lovely, subtle flavour.

Ask people around you if they mind you vaping

Before whipping out your e-cigarette in the park or in your friend’s car, the polite thing to do is ask if they mind you using it. Giving them an opportunity to ask you not to use your vaping device and respecting their wishes is a good way to be a considerate vaper.

Keep your cloud-chasing at home

If you’re an enthusiastic cloud chaser who loves blowing huge clouds of vapour, that’s great! However, it’s important to keep your vapour-blasting sub-ohm devices for use in your own home, garden, or specific vaping spaces like a vape shop’s cloud-chasing competition. For vaping in public, we recommend opting for a Mouth-To-Lung (MTL) device such as the NVee Plus Vape Kit which will produce less vapour and therefore be more discreet. Plus, the variety in the vaping experience will keep you from getting bored of your vaping experience — it’s a win-win!

Use a higher PG e-liquid

Linked to the previous point, choosing an e-liquid with a higher percentage of Propylene Glycol is a good choice if you’ll be vaping near other people. Propylene Glycol is the thin, colourless ingredient in e-liquid that carries the flavour of the e-liquid, while the other ingredient, Vegetable Glycerine (VG) provides those dense vapour clouds. Therefore, choosing an e-liquid with a higher PG and lower VG ratio for your vape pen is a good way to ensure your vapour clouds aren’t big and annoying to those around you.

Though there is much debate around the adverse effects of vaping, especially for children, there are many other reasons not to vape in front of kids.

Not vaping around children is about setting a good example to kids and young people. Vaping is often used as a means for people to quit smoking, and though most vapers would agree that vaping is far better for you, the link between smoking and vaping is prevalent. You wouldn’t smoke in front of a child, so why vape?

Use a lower nicotine strength in your e-liquid in public

If you’re going to be vaping in a public place, choosing an e-liquid that contains less nicotine is a good idea. There has not yet been much research into the impacts of secondhand (or thirdhand) vapour, but we know that exposure to nicotine can pose health risks for some groups including pregnant people, according to Heathline. Therefore, if you know that you will be vaping near other people, it’s a good idea to choose a lower nicotine strength or opt for a nicotine-free e-liquid.

What are the rules around vaping?

Now we’ve covered the etiquette for using your vape device, what other rules impact vapers? Here are some of the questions that vapers frequently ask us about the laws around e-cigarettes.

Can I vape inside in public?

It’s not illegal to use your e-cigarette indoors. E-cigarettes don’t fall under the smoking ban, which prevents the smoking of cigarettes in enclosed public spaces.

However, this does not mean that you can vape in any indoor space. Locations such as restaurants, bars, nightclubs, cinemas, and offices often do not allow vaping on the premises, other than in designated smoking areas.

If you’re not sure what the rules about vaping are in a particular place, the best thing to do is to ask a member of staff. Don’t just start vaping — this could cause confusion and get you in trouble.

Can I vape outdoors in public places?

There are no rules preventing the use of vaping devices in public in the UK. You can vape on the street or in a park unless otherwise specified.

Can I vape in a smoking area?

You can use your e-cigarette in any smoking area — they’re not just for cigarettes! However, you might not want to be surrounded by smokers and their cigarettes, especially if you have recently quit smoking. In this case, the best option is to walk down the street or find a public space where you can use your vaping device comfortably.

Can I vape at work?

There is no law preventing vaping in most workspaces. Individual workplaces will have their own rules about whether vaping is permitted. If you’re not sure whether your workplace allows people to vape inside, ask your manager or Human Resources manager.

Can I vape in my car?

You can legally vape in a car if you are a passenger or if it is not moving. If you are driving the car, vaping is not specifically against the law, but there are laws against dangerous driving and inattention while driving, which using your vape might be considered under. Therefore, it’s best not to vape while driving.

Can I vape on public transport?

Most forms of public transport prohibit smoking and vaping. For example, you cannot vape on a train or even on the train platform in the UK. E-cig policies vary on different buses and coaches. For example, the buses in London do not permit vaping.

Can I vape on a plane?

Both regular cigarettes and electronic cigarettes are banned on planes, and airports are a no-vaping zone. Don’t try sneakily stealth vaping in the public loos in the airport or plane; there are sensors that will set off an alarm if you use your e-cigarette.

High PG vape juices are less common; in fact, even a 50/50 ratio might be considered ‘high PG’. E-liquids with a lot of PG in them are great for flavour but don’t create very much vapour. This is ideal for vapers who want a more discreet vaping experience, such as those vaping in public places and don’t want to bother other people.

Can I vape in a hospital?

Most hospitals do not permit vaping in the hospital, and some also ban vaping and smoking on hospital grounds. The policy varies across different hospitals, so check what the rules are for vape users at the hospital you are in.

Smoking and vaping are completely different, even though some laws and rules often classify them in the same category.

Smoking poses the risk of secondhand smoke, in which bystanders are exposed to the same harmful chemicals as the smokers using a cigarette. People who are exposed to this tobacco smoke are at risk of the same health conditions as smokers, and the danger is especially high for pregnant people and young children. In contrast, vaping has been estimated to be 95% less harmful than smoking by Public Health England. It’s still early days for vaping so we don’t have a lot of research about the impacts of second hand vapour, but it’s likely that this is less harmful than secondhand smoke from tobacco.

However, it’s still important to be careful about vaping around other people, especially infants and children, pregnant people, and people with lung conditions who are more at risk from the nicotine and chemicals in your vape juice. Therefore, we recommend avoiding vaping in public indoor spaces and using your vape device mostly in your home and open outdoor spaces.

With these vaping etiquette notes in mind, you can easily be a more considerate vaper. Want to learn more about the rules around vaping? Check out our guide to vaping abroad. Looking for a more discreet e-cigarette for vaping on the go? Why not try the Jucce Bar, a rechargeable pod system that is easy to slip in a pocket and enjoy while out and about? Using disposable pods in a range of our favourite flavours (check out Peach Iced Tea Ice and Blue Raspberry Ice!), this is a great starter kit for discreetly vaping on the go. Just make sure to follow the vaping rules of any public place you are in! 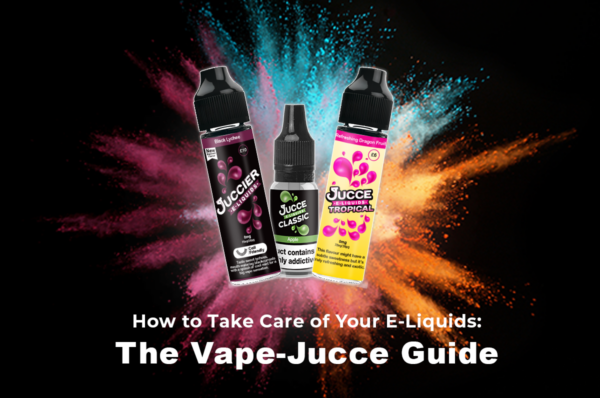 We’ve decided to debunk the most popular myths & conspiracy theories about vaping & e-cigarettes, backed up by…